Back to Basics Blog

Posted on February 24, 2011 by b2b
Rick Perry isn’t used to getting a cold reception for his stirring delivery of Tea Party talking points, but that’s what happened yesterday in San Antonio at the National Association of Latino Elected and Appointed Officials (NALEO) convention. Attendees had plenty of reasons to give Perry the cold shoulder: his insistence on passing Arizona-style “sanctuary cities” legislation, discriminatory redistricting maps and massive cuts to education to name a few, but he steered clear of these controversial topics. Instead, he focused on what most consider his strength as Governor and potential presidential candidate: Texas’ economic performance. 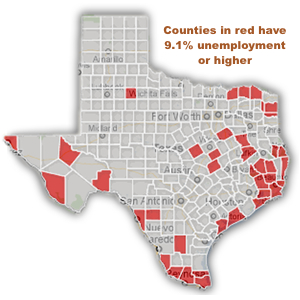 But Latinos and others have plenty to be unhappy about with Perry when it comes to jobs as well. He makes a big deal out of Texas’ unemployment rate being lower than national average. That’s not the reality for many Texans though. Unemployment in the Rio Grande Valley is almost 12%, but Perry just vetoed a bill that would help create economic development in the border region. In fact, Latinos all over Texas are more likely to be unemployed, and more likely to live in poverty.

And what is Rick Perry doing to help everyone in Texas realize equal economic opportunity? Cutting 4 billion dollars from public education and cutting tuition aid for tens of thousands of college students. When growth in school enrollment is fueled by Hispanic children, and Hispanics lag far behind Anglos in earning college degrees, a budget that doesn’t prioritize education is a serious liability for the future of Texas.

We are not giving all our citizens the tools to succeed. As State Rep. Joaquin Castro said, “You have a population in Texas that is generally lower educated, poor, isn’t covered by health insurance…..We’re not creating a system that educates them well and prepares them,” he said. “We underinvest in these things, which is what Perry is doing in public education and higher education.” As more media attention focuses on Rick Perry, people are becoming aware that the kind of “Texas Model” that Perry touts would be a catastrophe on a national scale. And it’s not a model they want for our diverse, growing country.

In case you missed it….

Some in the legislature aren’t letting the special session interfere with their vacation plans! Republican caucus chair Larry Taylor was enjoying the Bahamas this week while negotiations on the Texas Windstorm Insurance Association (TWIA) went on. Thanks to the example he set, the House couldn’t muster enough members to do business for two days this week, dragging out the special while taxpayers foot the bill.

We count on you to help spread the word about what’s really happening in Texas. You can share this post on Facebook, Twitter, and send it to your friends who aren’t yet aware about Perry’s so-called economic record, and the GOP supermajority that can’t even show up to work.

This entry was posted in Blog. Bookmark the permalink.